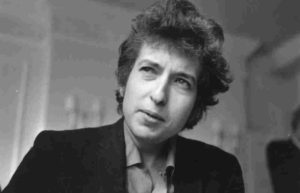 Bob Dylan’s musical career has spanned more than fifty years.  He has sold over 110 million records around the world. Two of his  most famous songs “Blowing in the Wind” and “The Times they are a-Changin’” became counter culture anthems in the 1960s signaling a new era of protest and civil rights.  What is less known is Dylan’s career as a visual artist.

Born Robert Allen Zimmerman in  Duluth, Minnesota in 1941, he renamed himself Bob Dylan, inspired by the poet Dylan Thomas. In an interview, Dylan said: “You’re born, you know, the wrong names, wrong parents. I mean, that happens. You call yourself what you want to call yourself. This is the land of the free.”

In the early 1960’s he dropped out of college and found his way to the coffee houses of Greenwich village New York where he became part of the burgeoning folk scene. There he performed with (among others) Dave Van Ronk, Fred Neil, Odetta, and the New Lost City Ramblers.  He was greatly influenced by his hero Woody Guthrie.  Perhaps some of Dylan’s earliest forays into the world of visual art appear as cover art for his albums “Self Portrait” (1970) and “Planet Waves” (1974).

Drawing, sketching, and painting steadily while on tour, and then as he was recovering from a motorcycle accident, it was  not until the mid 1990s that Dylan’s art work became known to a wider audience .

Much of this work consists  of  portraits, interiors, landscapes, still lifes, nudes, and street scenes done to “relax and refocus a restless mind” as Dylan says.  Not surprisingly, these are the views of an outsider looking in.  He is observing the scene rather than being part of it.

An early goal in his visual art was to create works that could not be misinterpreted. One of his first series “The Beaten Path”, done in collaboration with The Halcyon Gallery, consisted of paintings of the American landscape. By carefully editing the scenes that he was representing Dylan chose not to show the modern world, but to show a more timeless representation of America. Similar to his song lyrics, these paintings never reference technology or modern times.  What gives his music a timeless quality is also seen in his visual art.

While travelling on tour between 1989 and 1992, Bob Dylan created a collection of drawings that were published in a book entitled ‘Drawn Blank’ in 1994. These expressive works capture Dylan’s chance encounters and observations.   Through the   encouragement of Ingrid Mössinger – the curator of the Kunstsammlungen Museum, in Chemnitz, Germany – Dylan used these drawings as the basis for this series of watercolor and gauche paintings.  . “I was fascinated to learn of Ingrid’s interest in my work, and it gave me the impetus to realize the vision I had for these drawings many years ago,” Bob Dylan commented.

Many of the drawn images were painted several times using very different palettes to create multiple versions which allow a single image to convey very different feelings and emotions.

Woodshed Art Auctions is pleased to announce that ‘A Private Collection of Prints’ by Bob Dylan will be available at our upcoming auction on September 20, 2017.

This collection of twenty five works from the Drawn Blank series will be auctioned separately.  They display Dylan’s wide range of subject matter including portraits, interiors, and landscapes.  Several of the pieces are variations on an original theme expressing different moods through color and brush stroke.

Please view the entire offering of Dylan works to be auctioned at special session preceeding the Prestige Collection sale on September 20,

One thought on “The Visual Art of Bob Dylan”