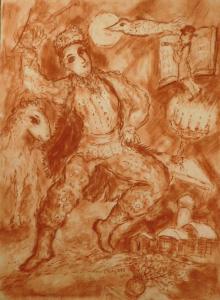 Marc Chagall was born in 1887 in what is now Belarus. The eldest of nine children, he attended the local Jewish religious school which was the only option at the time, since mixing of different racial groups was prohibited. His early education stressed Hebrew and the Old Testament, themes that would prove important throughout his artistic career.

As a young artist Chagall loved to draw and copy images from books. He quickly realized that he must pursue a career as a visual artist, despite the protestations of his parents.

In 1906 Chagall relocated to St. Petersburg and apprenticed for set designer Leon Baskt who encouraged Chagall to introduce Jewish imagery into his work.

The Cubist movement drew him to Paris in 1910 where, speaking no French, he quickly aligned himself with the Cubists. Two early paintings reveal their influence, Half Past Three (The Poet), and I and the Village.

Chagall’s innate interest in color, humor, and emotion ultimately led him away from the academic rigor of Cubism. A love and longing for his far away home inspired reoccurring images of pastoral villages, weddings, and free floating fiddlers, themes that would inform his work throughout his career. His use of disparate and disassociated images occupying the same space is often thought to be a precursor to Surrealism.

By 1917 Chagall had met his muse and future wife Bella Rosenfeld, and painted Bella With White Collar. Of this painting Chagall said: “Only love interests me, and I am only in contact with things that revolve around love.”

The outbreak of World War l forced Chagall and Bella to leave Paris and return to Russia, where they would remain until 1923. During that period Chagall continued to paint as well as teach. By the mid 1920’s Chagall began to enjoy some attention for his unique work which constantly eschewed current trends over Jewish religious and cultural influences. Paintings such as Green Violin (1923 – 24) and Dancing Marjim (1931) both recall Jewish beliefs that music and dance bring one closer to God. Musical imagery would continue to be an essential part of his art throughout his career.

Chagall’s friendship with art dealer Ambrose Vollard led to a commission to paint multiple scenes from the old testament. Traveling to Palestine, and the holy lands in 1931 Chagall was further inspired to create images from the Christian bible, including over 100 etchings, and most notably White Crucifixion (1938) Which portrays the suffering of Jesus Christ, and the Jewish people. It is notable that this painting contains one of Chagall’s recurring themes – The Wandering Jew, which would appear in his work until he died.

In 1941 Chagall was living in Vichy France. It is believed that Joseph Goebblels (Nazi propaganda minister) personally ordered Chagall’s paintings to be burned. Thanks to the quick intervention of Alfred H. Barr, director of The Museum of Modern Art in New York, Chagall’s name was added to the list of European artists whose lives were at risk and in need of asylum. In June Chagall and Bella arrived in New York City. 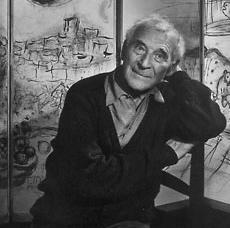 Before the war was over, Bella had died, and Chagall learned that his village back home had been razed during the German invasion of Russia. Not surprisingly, Chagall’s output dramatically decreased during this period, however, he took commissions for theatrical sets and costume design.

New York never really became Chagall’s home, and in 1952 he returned to Southern France and married Valentine “Vava” Brodsky. His work took on a more melancholy feeling with muted colors, and seemed to lack the focus of his earlier work.

In 1960 Chagall was challenged with a huge commission to represent the twelve tribes of Israel in stained-glass, for Hadassah University Medical Center in Jerusalem. Similar projects followed in both Europe and the U.S, most notably for the U.N., and the Art Institute of Chicago.

The Woodshed Gallery is proud to offer an 2 original sanguine drawing by Chagall. The first is titled Village Berger Descending. In this drawing one notices the iconic imagery of the fiddler, village life, and religious celebration. Chagall’s whimsical use of scale shows birds larger than men and farm animals dwarfing their farm. The second drawing is Violinist and Family, similarly recalling Chagall’s familiar themes, a fiddler, rural life, farm animals, and of course music.

Both Village Berger Descending (a.k.a. Dream of the Dance), and Violinist and Family, will be available at our auction on February 22, 2017.

Today Chagall is remembered for his lyrical and dream-like images. While incorporating elements of Cubism, Fauvism, Symbolism, and Surrealism, his work does not fit neatly into any one of those categories. Rather, his unique style is simply in service of the important themes of his life, family, faith, and love.