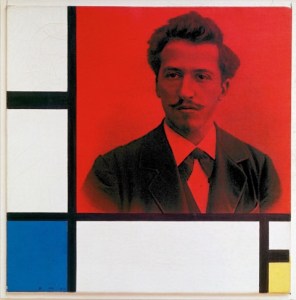 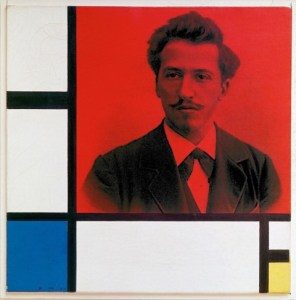 The young Piet Mondrian, whose father was a drawing teacher frequently drew and painted along the River Gein near his home in Amersfoort, in the Netherlands.
Born in 1872 and raised in a strict Protestant family, Mondrian entered the Academy for Fine Art in Amsterdam in 1892. His early pastoral paintings featured windmills and rivers. During his early years Mondrian experimented with Pointillism and Fauvism, in search of his own style.
Despite the fact that Mondrian’s early paintings were almost exclusively realistic, he always stressed form over content, prefiguring his ultimate interest in pure abstraction.
In 1909, Mondrian joined the Dutch branch of the Theosophical Society, whose beliefs in universal brotherhood, and the mysteries of the cosmos led him to his early artistic theories of Neoplasticism.
In 1911, Mondrian left the Netherlands for Paris and dropped one of the “a’s in his given name; Mondriaan, in a effort to sound less Dutch. In Paris he experimented with Cubism and associated with Georges Bracque and Picasso, yet always attempted to reconcile his painting with his spiritual beliefs.
While visiting his family in 1914, World War l began, forcing him to remain in the Netherlands for the duration of the war. During this period he met and was greatly influenced by the artist Theo Van Doesburg. This friendship led to the founding of the De Stijl Group, and in its journal Mondrian first published his essays defining his theory of Neoplasticism.
After the First World War ended, Mondrian returned to France where he created some of his most iconic and recognizable work: rectangular forms outlined in black, rectangles filled with only primary colors.
In the face of advancing Fascism, the invasion of the Netherlands, and the fall of Paris in 1940, Mondrian was again forced to seek refuge, this time in New York City where he remained, and worked until his death in 1944. 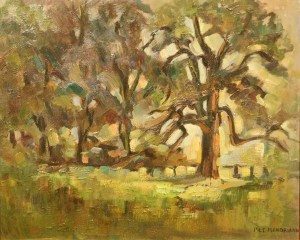 Knowing Mondrian’s iconic style, it is interesting to look back at this c. 1910 painting on auction January 25, and see how, perhaps unbeknownst to him, a style was already emerging. In this oil painting Am Gein Weiden / Gein River Meadows, one can already see the characteristic strong angular lines, and Mondrian’s stress on form over content.