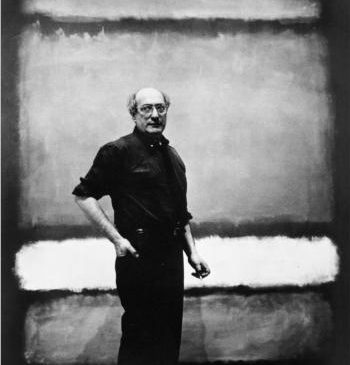 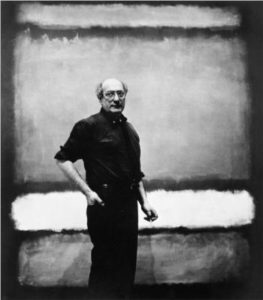 The name Mark Rothko has become synonymous with the term “color field painting” a style of abstract painting that emerged in New York City during the 1940s and 1950s.  Often thought of as an Abstract Expressionist, Rothko arrived at his iconic style after a long artistic and spiritual journey.

Born Markus Yakovlevich Rothkowitz in 1903 in Russia, Rothko moved with his family to Portland Oregon as a ten year old.  A brilliant student and voracious reader, he was raised among the radical worker’s movement, and attended meetings of the Industrial Workers of the World (IWW). This world view was to shape his life long beliefs and commitment to worker’s rights, and women’s right to contraception. Two years at Yale University only reinforced his belief that such institutions were elite and racist, so he left to become essentially self educated.

It was not until 1923 that Rothko became a serious art student. He studied with Arshile Gorky at Parsons School of Design in New York City, and later with Max Weber at the Art Student’s League.  It was Weber who first made Rothko understand that art could be a tool for religious and emotional expression.  During his time in New York, Rothko met  Adolph Gottlieb, who, along with Barnett Newman, Joseph Solman, Louis Schanker, and John Graham, was part of a group of young artists surrounding the painter Milton Avery. Avery’s influence on the young Rothko is most evident in The Bathers,  a stylized nature study with great attention paid to color.  Summers were spent in Gloucester, Massachusetts with Avery which lead to Rothko’s first one man show of watercolors at the Portland Museum of Art in Maine.

Rothko’s interest in Greek mythology combined with a fascination with Nietzsche’s The Birth of Tragedy  led him to believe that his art should address modern man’s spiritual emptiness. He believed that this emptiness was partly due to a lack of mythology. He considered himself a “mythmaker”, and proclaimed that “the exhilarated tragic experience is for me the only source of art”. This is exemplified in one his most famous works of this period: “Slow Swirl at the Edge of the Sea,” which features symbols of music, the truly universal language.

Much of Rothko’s early  attempts to make the transition in his paintings from  representational to purely emotional art no longer exits. Rothko destroyed many of these paintings himself, feeling that they failed to connect with the viewer on an non verbal level.

It was through a long and difficult process  that Rothko finally arrived at his ‘color field’ paintings, the style for which he is most known today.

Rothko began to paint in a much larger format and spoke about wanting people to actually be in the paintings. These painting have no frames, and the paint extends over the sides, as if to suggest that the painting does not end. He wanted the viewer to be in the painting, and transcend the art viewing experience all together.

A profound depression and dissatisfaction with his work (despite critical acclaim) led Rothko to suicide in  1970 at age 67.
What remains is a body of work that attempts to articulate an interior expression and speaks to the need to synthesize life and art.
Several examples of Mark Rothko’s early color field paintings will be included in  Woodshed Art Auctions’ Prestige Signature Collection sales in the fall and Winter of 2017-18.