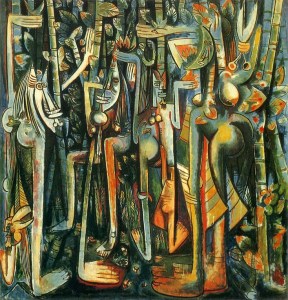 Considering the very different backgrounds of Cuban born Wifredo Lam, and Romanian Victor Brauner, it is interesting to see how similar their drawings can be. While influenced by Cubism and Surrealism both artists naturally gravitated to an imagery that fuses human, animal, and botanical themes.

Wifredo Lam
December 8, 1902 – September 11, 1982
The son of a Chinese immigrant and a Congolese slave, Lam grew up in Cuba, and lived amongst Catholic as well as African traditions. Initial interests in law and botany gave way to his desire to revive an Afro-Cuban spirit and culture through his painting. Lam studied in Madrid. Amongst his teachers was Salvidor Dalì. Later in Paris his friend Pablo Picasso was to exert a major influence on Lam. This can be clearly seen from Lam’s work from the 1940’s.

It was, however, upon his return to Havana that Lam really seemed to find his own style. Moved by the oppression of the descendants of slaves, and fearing that Cuba was losing it’s African heritage, he sought to paint the drama of his country. His mature style fused human, animal, and vegetable elements into his unique hybrid figures. Perhaps his most iconic work is The Jungle painted in 1943.

Victor Brauner
June 15, 1903 – March 12, 1966
Born in Romania and raised in Vienna, Brauner’s initial interest was in zoology (mirroring Lam’s early interest interest in botany). Something of a chameleon Brauner began painting landscapes in the manner of Cézanne and admits that he went through all the stages: “Dadaist, Abstractionist, Expressionist”.

In 1930’s Paris Brauner experimented with photography and befriended Yves Tanguy and fell under the spell of the Surrealists. During this period Brauner painted what were called “caricature like satires of the bourgeoise”. The war years were initially spent in seclusion in the Pyrenees, although he stayed in touch with the Surrealists. Eventually Brauner settled in Marseille. Perhaps his most iconic painting is the 1954 “Prelude to a Civilization” which now hangs in the Metropolitan Museum of Art in New York.

The primitive symbols used by both Brauner and Lam speak to a return to basics which was achieved only after a long journey through the influences of others. In the end, both artists came to develop his own symbolic iconography.

Woodshed Art Auctions is proud to offer he following drawings in our upcoming Prestige Collection sale on May 24th: