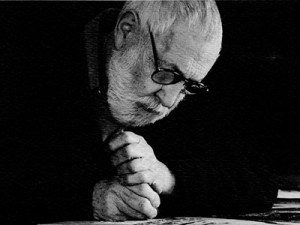 The son of an orthodox rabbi, Baskin’s figurative art was strongly influenced by his interest in classical forms, Greek mythology, and Jewish tradition.

His avoidance of abstraction grew out of his belief that the human being was the center of the universe as we know it, stating “man is glorious”. His often pessimistic view of the world was countered by his belief in the redemptive power of man. Baskin’s art was his attempt to communicate that redemptive power, frequently depicting men as mythological forms, heroic but flawed beings.

Baskin founded the Gehenna Press in 1942 while a student at Yale University. The name ‘Gehenna’ which is synonymous with Hell is a place where the wicked go when they die.

Inspired by William Blake, who was also a poet, artist, and book maker, Baskin began printing and publishing his own illustrated poems. His first book was entitled On a Pyre of Withered Roses (1942). Baskin’s creative output was interrupted by his service in the U.S. Navy during World War ll. Baskin’s second book, A Little Book of Natural History, was published in 1951, nine years after the first.

During the 1950s The Gehenna Press ran on a shoestring, using second hand printing presses. Baskin’s growing interest in wood engraving led him to in his words: “invent typographic structures of originality and sensitivity”.

While maintaining his commitment to the role of artist as printer, Baskin began to collaborate with a new partner, Richard Warren, and together they printed Thirteen Poems by Wilfred Owen as well as Horned Beetles and Other Insects. Eventually Harold McGrath became the pressman for the Gehenna Press. The press began printing the works of other artists and Gehenna went on to set the standard by which all fine press books are measured. Later Baskin formed deep and lasting relationships with with poets Ted Hughes and Anthony Hecht, illustrating and collaborating on works by both men.

In a world of mass produced images, it is interesting and refreshing to look back on Baskin’s appreciation for limited editions. To him each print was a unique work of art in it’s own right.

During his lifetime Baskin received many honors, among them a Guggenheim Fellowship, the Gold Medal of the American Academy of Arts and Letters, and the Jewish Cultural Achievement Award. In recent years Baskin’s work has been shown in retrospectives at The Smithsonian, The Albertina, and the Library of Congress.

Gehena Press lasted for more than 50 years and produced more than 100 books, an achievement that no other private press has since been able to match.