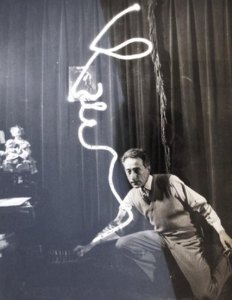 Perhaps one of the most versatile artists of his generation, Jean Cocteau was an accomplished writer, visual artist, and film maker. Cocteau, however, always considered himself primarily a poet.

In 1889 Cocteau was born to a politically prominent family in Maison-Lafitte, a small town near Paris. Cocteau’s father, a painter, committed suicide when the boy was only nine years old. By the age of fifteen he had left home to live the life of a Bohemian. Cocteau’s initial creative output was a volume of poems entitled Aladdin’s Lamp. He befriended Marcel Proust and in 1912 Léon Bakst persuaded him to write the libretto to Le Dieu bleu for the Ballets Russes which featured a young Vaslav Nijinsky. Later ballet projects saw Cocteau collaborate with Sergei Diaghilev, Guillaume Apollinaire, Pablo Picasso, and Amedeo Modigliani.

It was his 1929 novel Les Enfants Terribles that revealed his unique, and sometimes, startling vision of human interaction. The novel tells the story of siblings who isolate themselves from society, sinking deeper and deeper into their self-made world of fantasy which grows cruel and deadly.

Cocteau’s films were wildly creative, pushing the medium to it’s limit where nothing was out of bounds: film run backward gives the appearance of candles bursting into flame; reorienting his camera and subjects he was able to upend gravity in such films as Beauty and the Beast, Blood of a Poet, and Orpheus.

Cocteau’s films have become inextricably linked to the Surrealist movement of the late 1920s and early 1930s. Cocteau, though, never considered himself a Surrealist. He was undoubtedly influenced by the movement, and his association with some of it’s leading proponents.

Cocteau was not generally known as a painter. His visual output was primarily sketches and set designs. His existing drawings reveal a style that was heavily influenced by his friend Pablo Picasso. Long continuous lines and quick movements are enough to convey his ideas that often reference classical imagery.

Woodshed Art Auctions is proud to offer two Cocteau drawings and one watercolor in our upcoming Prestige Collection sale on May 24th.